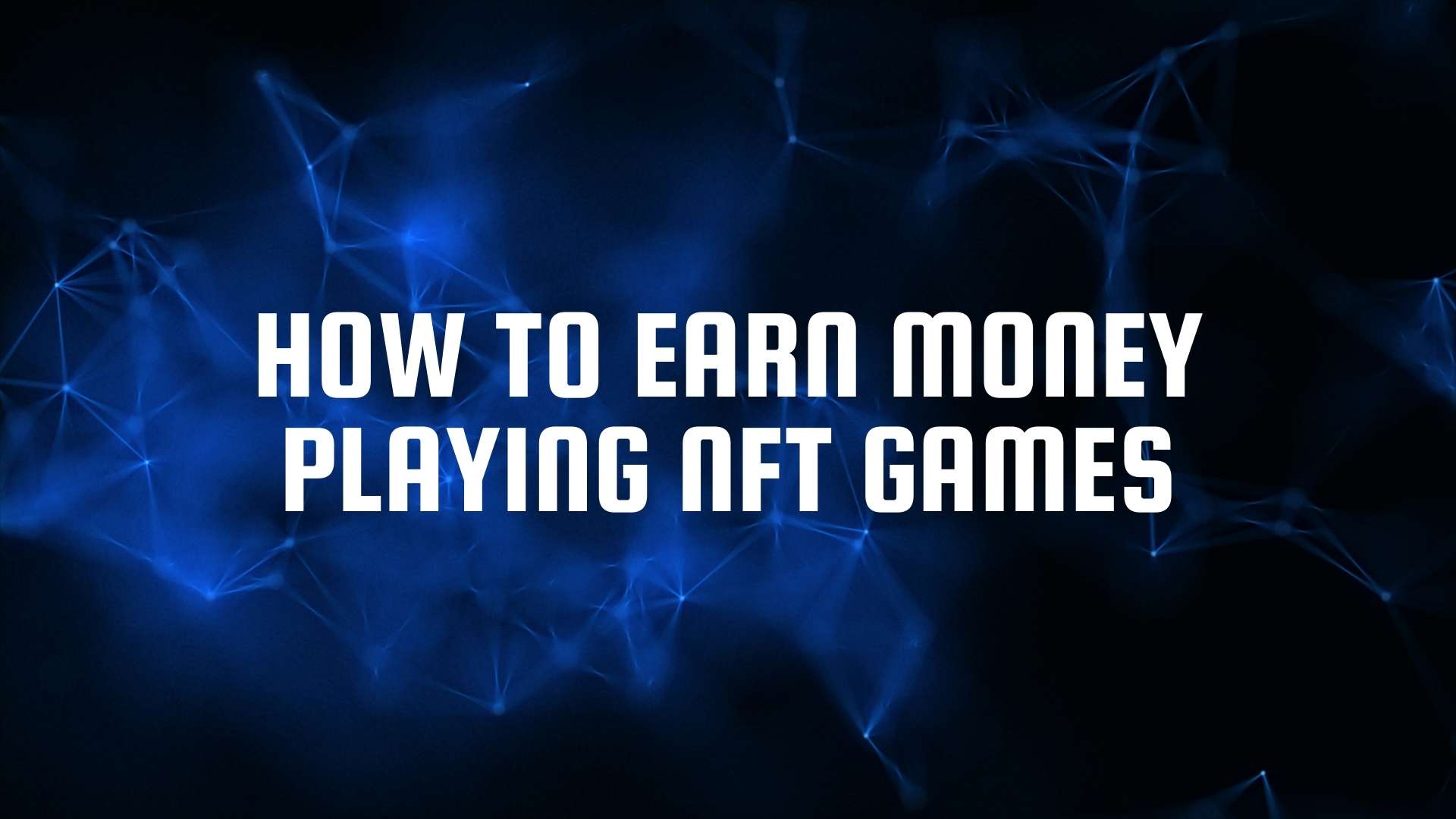 In this article, you will learn how to earn money playing NFT games!

The son approaches his mother and says – “Mom, I want to build a career in the future!”, Mom smiles and says – “You won’t earn money there, go play games”, this will be something like the near future.

More recently, we perceived cryptocurrencies as a thing that will lose their popularity as another pyramid, then we thought the same about the NFT, and now after the NFT’s billion-dollar capitalization of game projects, investments, and huge growth in users, there are no skeptics left.

Web3 is an opportunity for everyone, each person can earn as much as he wants, and he can make all his dreams come true, these are the dreamers who created the NFT game.

Most people know about the availability of earnings but do not understand how to make money, how it works, and what the nuances are. We know how difficult it is sometimes for a person far from Web3 to delve into all the processes and understand the process itself, and it is because of this that we have created this article for you – we have selected the top 10 options for making money on NFT games.

An NFT or non-fungible token is a virtual asset on the blockchain network. NFT gives you the right to own an asset on the network that is attached to your wallet, so for example they can be used as documents, art, gaming asset, and even money.

NFTs are attached to your wallet and belong only to you, the platform cannot take them away from you or confiscate them (for example, in games, even if you break the rules, the item remains with you), you can also speculate on marketplaces or exchange them.

We have analyzed and selected the best ways to make money in NFT games.

1. Battles with other players

Platforms appreciate the battles with other players and generously reward for victories, such as Axie Infinity. You are offered a duel in which you make up your pets and fight against another player, the main goal is the destruction of the enemy’s pets.

Or card games, in many card games you are given either pumping points or the opportunity to get another card that can be exchanged for real money.

This method is practical but not easy, since your opponent also wants to receive a reward. You’re better off using this method if you’re good at games and think you can consistently win.

How to start: to start battles with players, you need to choose a suitable NFT game with PVP mode, then learn the mechanics of the game and prepare a deck/pet composition, then start a fight and develop a skill in parallel.

How much I can earn: Earnings are very variable and depend on your luck and perseverance, but I would say that if you wish, it starts from $20 for one game day.

Let’s go back to Axie Infinity, this game has a built-in animal breeding system, in simple terms, you can cross pets and with some probability, you will get a rare species.

This method is risky but lucrative; many people invest their annual savings in animal breeding and often they pay off (but we do not guarantee this, do everything at your peril and risk).

How to get started: you have to determine for yourself how much money you can invest and how much risk you are ready to take, then go to the link – https://marketplace.axieinfinity.com, and choose the right Axie, you can look at the Axie crossbreeding guide for more confidence.

How much can I earn: The spread is very large but it depends not only on luck but also on your professionalism, you can earn from $10 to $1000 per day (some Axies cost thousands of dollars)

The turnover of NFT marketplaces grew 400 times in 2021, and at the beginning of 2022 this figure exceeded 3 billion, every day millions of people trade NFT overselling it, so what is stopping you?

How to get started: Analyze NFT game projects (you can do this through our website), and determine a suitable budget. Buy NFTs from various projects that you think can rise in price in the short term and then find a buyer

How much I can earn: I would say that if you figured out this, you could earn from $500 to $2000 on reselling, in my circle of friends some people earned more than $5000 on reselling in one month.

How to get started: In-game tournaments are held every week, and bigger ones every month. Sorare hosts several tournaments every week. Familiarize yourself with the mechanics of the game and collect a deck of cards, then start playing!

How much I can earn: Earnings depend on your place in the tournament and luck, but if we take the participation of the average player, then this is about $10-100 per tournament.

Many games (for example MIR4) can level up a character with which you complete missions, and tasks and explore dungeons. The more pumped your character is, the more difficult dungeons you can go through and the more rewards you can get.

How to get started: Sign up for one of the character-building games, take MIR4 as an example, no investment is required but if you want a faster start you can buy a character. Then start going through the dungeons and upgrade the dungeons for the rewards received, after a while you can sell your character.

How much I can earn: For one well-leveled character, you will receive from $20 to $40.

Some NFT games have an open world (sandbox), and some of them offer a lot of interaction with this world – capture, battles, and resource extraction.

Let’s take Star Atlas as an example, the game will have a completely open world with planets, and each planet is rich with a lot of resources that are needed for crafting. For them, there are battles and battles, and for those who receive them, the players will be ready to pay decent money.

How to start: The Star Atlas game is not out yet, but to start you don’t need anything, you just go into the game and start looking for resources, then after mining a certain amount, you can sell them on the marketplace.

How much can I earn: Let’s draw an analogy, the game World of Warcraft, which is now in an online recession, brings people to sell resources for such an amount of in-game currency that is equivalent to $ 30 per day, but at the same time selling them for real money is prohibited by the rules. Star Atlas not only allows them to be sold, but also encourages this by issuing bonuses, and now compare the rise in popularity of Star Atlas and the fall in activity in World of Warcraft, according to the minimum calculations, you can receive $50 per day.

Many projects are interested in you replenishing the liquidity of their tokens and are ready to reward you for this, as so did Axie Infinity. They are ready to give you rewards and bonuses for blocking your AXS tokens in their network for a certain period, periods are from 3 months to a year (profit varies depending on them).

If you want to withdraw your tokens, most platforms will refuse you, so do it at your own risk, and we do not recommend investing in unverified projects.

How to get started: You need to buy or earn AXS tokens, then go to your account in the staking department and choose for how long you are ready to deposit funds.

How much I can earn: Depends on how long you are willing to lock up your funds, from 3% to 10% for one staking period.

In NFT games, some guilds take care of renting upgraded accounts, this is most developed in Axie Infinity. It works quite simply – you have a pumped account and you don’t have time to use it, but it can make real money, and then guilds appear that offer to take your account for a certain percentage of earnings. The specialist takes your account and starts earning, and you get decent money.

How much I can earn: Usually such guilds pay 30%-60% of the funds earned on the account, and professionals usually work in shifts, which is why such cooperation is beneficial for both sides.

NFT games have a very large community, some platforms like Star Atlas offer whole associations of players in the fight for more money, you can capture planets, influence, and resources. It is obvious that the more players in the union the better, but not all friends want to help and some simply do not know how, so what to do?

You can help other players for a percentage of production, or even sell yourself as a professional for an hour. This practice is already present, usually, these are games in which you need to conquer territory. The better you play and the more benefits you can bring, the more valuable you are.

How to get started: You need to upgrade your account, play well or just understand what is required of you, then start offering your services or go to the forum. When communicating with a client, be polite and prompt him.

10. Creation of the world

Yes, you heard right, oddly enough, you can make money on creating the world. There is a wonderful NFT game “The Sandbox“, in which anyone can create a world and create everything in it in such a way that people are interested in it. Let’s imagine a situation, an average company wants to hold a meeting, but they are very bored with the routine, and they decide to do it in a cozy environment – in the virtual world, they need a quiet, cozy, and beautiful world in which they can discuss all issues and details, and then you appear. The Sandbox has already hosted hundreds of meetings and made serious money for its players, it all depends on your creativity.

How to get started: You need to register on the platform and then create your world, furnish it in such a way that it will attract customers, but if you want more unique items, you will need to invest money, after that you can search for customers on the forums.

How much I can earn: There are at least two known cases where players have received over a thousand dollars for using their world for a meeting, you can do the same and earn at least $50 per meeting.

Our top has come to an end, you see the potential and opportunities for earning NFT game, be careful and remember that each of these methods has its own risk, but who does not risk does not drink champagne!