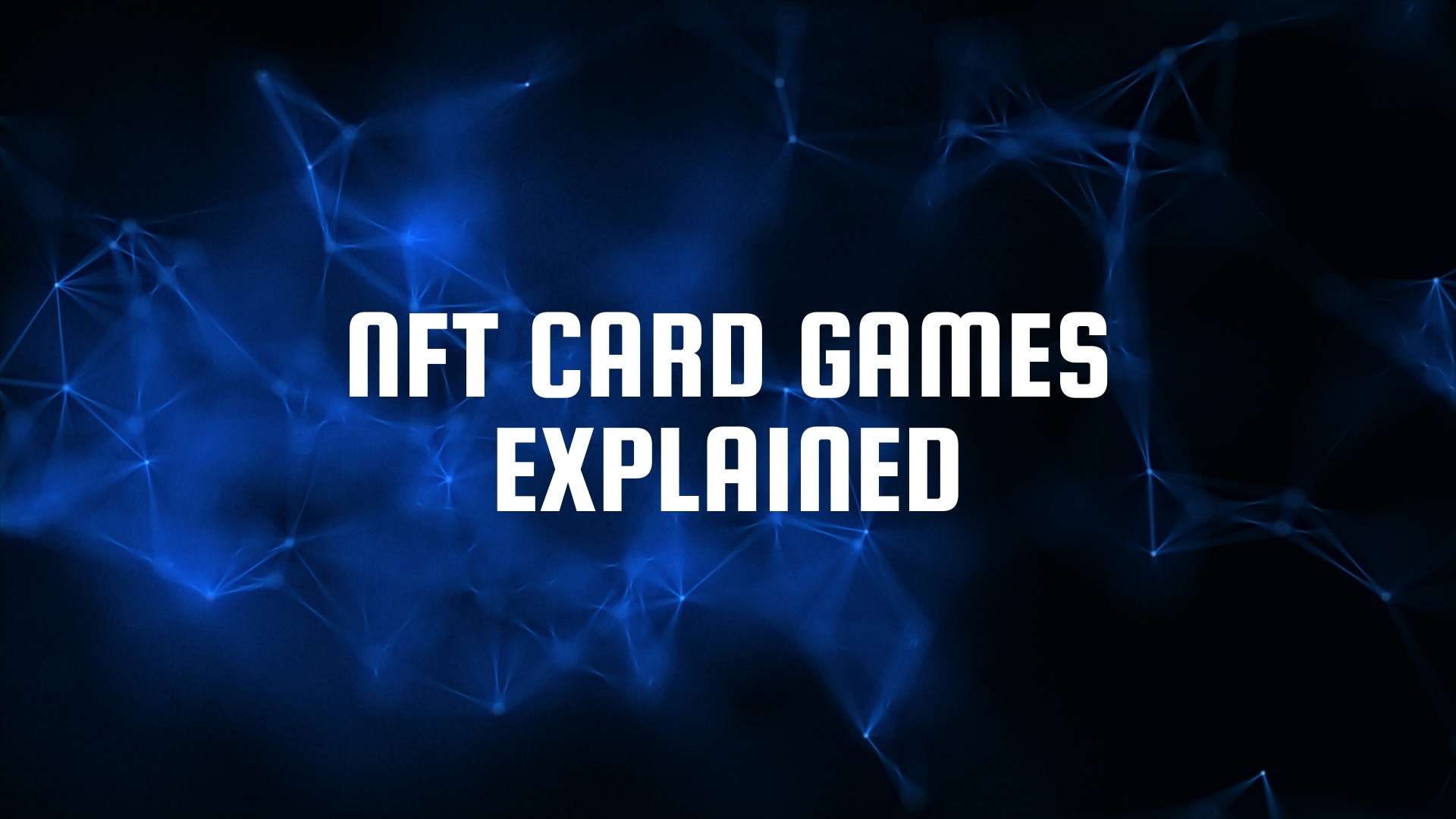 In this article, you will learn more about NFT card games!

The NFT sphere involves an increasing number of investment funds and large companies, the turnover in the NFT industry is approaching $4 billion per year, and this number continues to grow. It’s no secret that NFT games are the trend of 2022, which is worth hundreds of thousands of users that have already registered before the launch of Star Atlas, or broken records for the sale of NFT, and integration into the metaverse.

NFT card games appeared suddenly and spectacularly. The card game industry is one of the most lucrative of the gaming industry, only in poker professional players receive up to 150 thousand dollars a year, which indicates large support of investors and prize funds for tournaments that are approaching one million dollars.

Is it possible in NFT?

Is it possible to create a card game with Web 3 integration that will become part of the gaming industry and even have its esports?

Yes, it is possible, and in this article, we have selected for you the most ambitious and successful projects, analyzed them in detail, and compiled the top 10.

Each of the selected projects has its peculiarity, its team, and its philosophy, as well as its own risk. NFT card games differ from regular NFT games in their strategic content, some projects have included the Play-to-Earn concept for player-to-player battles. Enjoy reading!

Gods Unchained is a free blockchain-based competitive game with a Play-To-Earn concept. Players are rewarded for their time spent in the game, while they can compete with each other and receive additional rewards. This is a strategy game where you need to select the best set of decks, and tactics to win. Gods Unchained also places great emphasis on the fact that all in-game items belong to the players.

Even the most popular competitive card game “Hearthstone” does not give real ownership rights to its users, Gods Unchained is completely different, they want to give its users the right to own any in-game asset using Ethereum-based NFTs, which allows them not only to earn rewards but also to exchange /sell them.

The gameplay of the game is quite simple – the game is free, upon registration the player receives 140 cards, and he can compete with other players or participate in tournaments, thereby earning new rewards. In addition, there are card levels in the game, at first, the player is given cards of the Common level, if he wants to get a higher quality card, he must go to the forge, and there with a small probability he can get a rare card. The higher the quality of the card, the stronger it is. The player can also buy/sell/exchange cards.

All cards are in the blockchain network like NFT, in addition to this, there are $GODS tokens in the game, which play a key role, you can sell and buy cards for them.

Gods Unchained has become one of the first and most successful NFT card games, it completely breaks the stereotypes of the card game industry and attracts more and more popularity

Splinterlands is one of the leading NFT card games, the game is very well established and has over 360,000 daily active users at the time of writing. This is a competitive strategy fantasy game where you have to assemble your team and fight against other players. In the game, you can earn real money, improve cards, open chests and get cards of rare quality.

The NFT card market is very voluminous, you can get the cheapest card for $0.01, and the most expensive one for $133.000

There are two types of cards in the game – Summoners and Monsters.

Summoners – a card that determines the class of the future squad, some of them can give your monsters additional characteristics.

Monsters are those cards that participate in battles.

Each monster has its characteristics: mana, attack, armor, life, speed, and ability.

The cards have a level, the higher the level, the stronger the monster. You can level up by fighting in battles.

When you find a game, you can place the monsters in close range or long-range, and the monsters have attack types – close range, ranged, and magic. The key point is exactly the location of the cards, after which the game algorithm determines the winner.

Berserk is a competitive Play-To-Earn card game set in the Vulkan Forged universe in which you can collect cards with unique abilities and traits, build your strong deck, and defeat both enemies and the computer.

The game has a large number of opportunities for spending time, you can collect cards, earn money, and play with friends.

Fight for courage and glory

Volcanites have appeared on the killing fields and they need you to lead them to victory. Fight your opponent’s creatures with full force!

Collect cards by experimenting with their abilities and interactions, thus becoming even stronger!

Do you have an unwanted card? Sell ​​it for real money or exchange it for the game you need on the marketplace.

Participate in tournaments and battles with other players, so you can earn real money!

Kingdom Karnage is one of the first cross-platform NFT card games with in-game earning opportunities.

I would say that Kingdom Karnage is the kind of game that is tuned to the player’s emotions, to his comfort. The game is very exciting and, unlike all competitors, it has great chances of rewarding players.

Before the start of the game, the player forms a deck of 30 cards, the cards are divided into rarity (Common, Uncommon, Rare, Epic, Legendary). Each card has its health and the goal of the game is to destroy the opponent’s deck and overthrow the hero. For each game, the user receives a reward.

Winning the game depends on the structure of the colloid, its rarity, and the strategic thinking of the player, it is very interesting.

As I said, Parallel Alpha cards look amazing, there is no NFT 2D and cartoonishness inherent in NFT, everything looks realistic and professional.

The game even on the drop proved to be highly popular and attracted investors (they collected almost $1.5 million on the first day)

The game combines interesting gameplay and amazing graphics, games take place 1 on 1, each player has 40 cards (each has his abilities, features, and skills) and the main goal is to destroy the enemy. The player himself chooses the structure and strategy of the game.

Parallel is hinting that they are serious, and we can see this by the incredible popularity and attraction of investors, a lot of money has been invested in the project and it is worth it. Given the uniqueness of the gameplay and the game as a whole, it is quite possible to enter eSports, which can lead the project to leadership in the industry.

Skyweaver is a cross-platform card game similar to Gods Unchained in many ways, the main difference being a couple of unique features and an NFT marketplace. The platform is built on its blockchain based on Ethereum, and the “Play To Earn” concept is also built into it.

The platform is run by the experienced company Horizon Blockchain Games, a team of highly qualified specialists (a portfolio of a dozen projects and decades of experience).

The game has the following modes:

• Education. Here the player explains the basics of the game and the mechanics.

• Practice. You can play against the computer to hone your skills and try different strategies.

• Private duel. You can practice with real players and level up your account.

• Conquest. Starting the game, you are offered a series of three games, with each game won, your reward increases, if you lose, you can continue the game for a silver card (you can buy or knock out in rating mode)

• Ranked game. Rating game between players for a place at the top, for a series of victories you get silver cards.

Metropolis Origins is an NFT collectible card game created by QXR studios from the cyberpunk universe. The game was created quite recently but attracts with its functionality and uniqueness.

There are three factions in the game:

Each card has its characteristics and abilities, so a card can have muscle, cunning, or hacking skills.

The gameplay consists of a 1v1 competition, each player has 30 health points and the goal is to destroy the enemy through the use of cards.

After each victory, the player receives rewards and the opportunity to receive a new card, which can later be exchanged in the marketplace or sold.

Sorare is a new platform where you can collect digital football player cards, trade/sell them, or take part in fantasy tournaments. Each of the cards is officially licensed by the club.

The platform is a partner of over 100 clubs including PSG, Atlético, and Juventus.

Cards have rarity levels that determine their value –

After registration, you will have 8 attempts to play the beginner mode, it can only be played with common level cards, you can get acquainted with the game and mechanics, and it is also possible to get new cards.

After completing the training, you can participate in the international tournament mode, this is one of the largest tournaments in terms of the number of players.

You can also try your hand at regional tournaments (which are divided by geographic location) and try to get additional rewards.

Every week there are special tournaments (special training and special weekly) where you can get unique rewards.

All cards are NFT tokens, which allow you to collect or sell them, thus the project is “play-to-earn”.

TaleCraft is an NFT card game with the ability to earn money inside the game built on Avalance, the uniqueness is that you can create NFT here, you create NFT from 4 selected elements and after that, you can exchange them or sell them for real money.

The cards have their shooting ranges –

• Iron tier. By combining these cards, you can get Silver Tier cards, although these cards are only the second level, they are already very strong and can bring you victory!

• Silver tier. These are some of the most sought-after maps on the market and can be used to create higher-level maps. They are already considered competitive with any cards

• Gold tier. These are very important and rare cards, they are very strong and are used for Philosophical Tier cards.

• Phi stone tier. The creation time of these cards is the highest and they are the rarest, they are rarely seen but they are very strong.

In addition to fighting other players, you can craft, stake, open weekly chests, and trade on the marketplace.

This is a virtual NFT card game with the possibility of earning and collecting. One of its main differences from the rest is card packs. You are like buying cards as a child, but there is only one difference, they can cost tens of thousands of dollars and they are in virtual form. The game is unique in everything – in gameplay, features, design, history, and even the philosophy of the project.

collect. Gather cards into a powerful block and defeat your enemies.

Battle. Use your cards to defeat enemies and get rewards!

trade. Buy and sell cards of different quality to thousands of people from all over the world.

The game is still at the pre-launch stage but has already published its roadmap, in short, they are focusing on the release of new exclusive card packs in the future, as well as the launch of the beta version of the game.

As you can see, we have collected the best projects for you, selected them according to exact parameters, and rejected more than a dozen projects. You can earn money in them, you can invest in them, but you can also just have fun in them. The choice is yours!